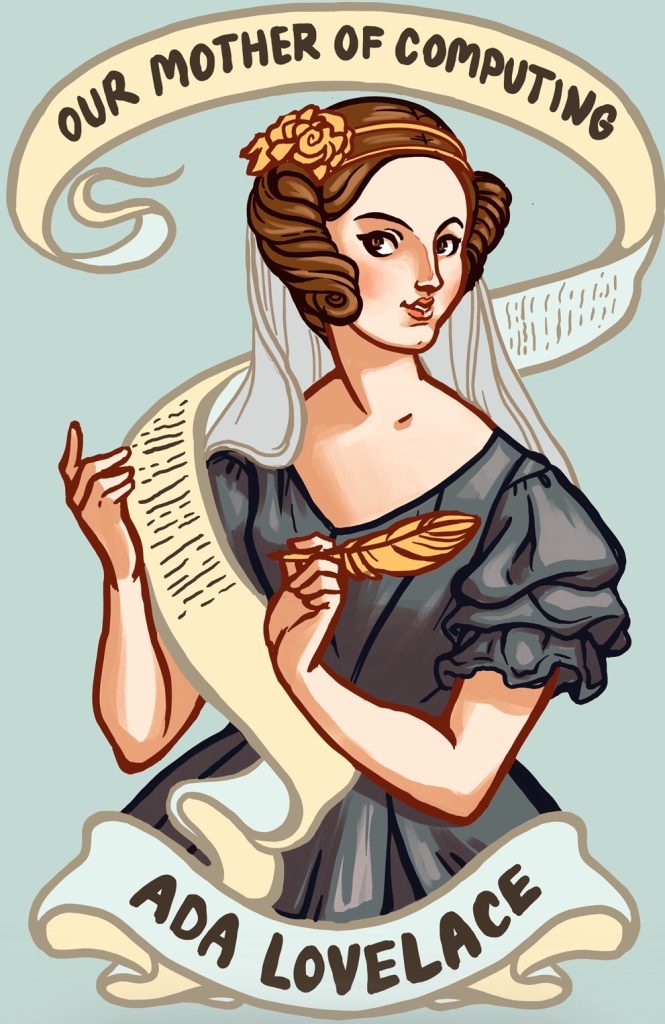 Ada Lovelace, daughter of Lord Byron, the great romantic poet, and Annabella, the Princess of Parallelograms, was a mechanical genius as a child solving every problem and curiosity she had methodically. Having drilled with arithmetic, music and French at an early age helped Ada get the education every woman hoped of at the time.

Ada conceptualised a flying machine approximately 50 years before Wright Brothers designed their motorised airplane. Through her connections, she met Charles Babbage, father of computers, and worked with him on the Analytical Machine. Her annotations and interpretations on how the machine could be programmed were brilliant. Babbage met with a mathematician, Luigi Federico Menabrea, who agreed to write a paper on the machine.  Lovelace translated it to English adding her own notes. Her version came to about twenty thousand words. Her clear understanding on how the engine will work was highlighted in the paper. She compared the Analytical Engine to the Jacquard Loom saying, “the Analytical Engine weaves algebraic patterns just as the Jacquard Loom weaves patterns”. She also mentioned how the engine can calculate Bernoulli’s numbers using punched cards and it became the first computer program.  She also believed that one could program music, images in a digitised form and program it into a computer.

Years later, some scientists still disputed whether Ada’s notes on the paper were legitimate and that her achievement has been overstated. While the others argued, saying that this was just a backlash as computer programming is more of a “male activity”. It took almost 100 years for everyone to recognise her contribution to Babbage’s work. In the 1980s, the US Department of Defense put together ADA, a programming language which controls everything from missiles to air traffic. It was a fitting honour to the First Computer Programmer.

Even till this date, females in STEM are overlooked for their achievements which discourage young girls from pursuing STEM altogether. A very recent example of this is of Jocelyn Bell Burnell. As a PhD student, she discovered pulsars, but her supervisor was given all the credit and a Nobel Prize for it. It was not until 2020, she was rewarded with a Breakthrough Prize of her own for the discovery she made. There are countless achievements that go overlooked or not talked about. Ada Lovelace Day which falls on the second Tuesday of October every year is just one day to remember the very many female scientists’, programmers’, engineers’ achievements but let us remember them every day, after all they did pave the way for the young girls in STEM today.